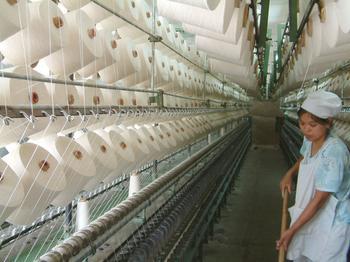 In 2013, policies to stimulate economic growth in various countries contributed to the slow recovery of the global economy. The foreign economic environment has improved, and our national economy has seen a slow recovery. Although the wool textile industry still faces numerous internal and external pressures, under the guidance of active policies and measures, the wool textile industry began a smooth period in the first quarter of 2013, with a good trend.

Steady Growth in Production Growth in Corporate Profits In the first quarter of 2013, gross yarn production increased by 3.47% year-on-year, a decrease of approximately 6.48 percentage points compared to the previous year. Gross wool production increased by 38.50% year-on-year, an increase of approximately 29.79 percentage points from the previous year. . In terms of investment in fixed assets, the gross investment in wool textiles and dyeing and finishing industries from January to March was 2.823 billion yuan, an increase of 6.47% year-on-year, and the number of newly started projects was up 10.53% year-on-year, but lower than the level of the textile industry.

From January to February, 1183 households in the wool textile industry achieved a main business income of 26.251 billion yuan, a year-on-year growth of 16.09%; a total profit of 1.187 billion yuan, an increase of 284 million yuan, an increase of approximately 31.50% year-on-year. The operating efficiency of capital in the wool textile industry has shown a trend of recovery, and the profit rate has increased compared with the same period of last year. The industry has shown a trend of gradual improvement.

Domestic sales continued to grow steadily The growth rate of foreign sales rebounded From the preliminary statistics, from January to February of 1186 wool textiles and dyeing and finishing enterprises above designated size achieved a total industrial output value and sales output value of 27.399 billion yuan and 26.521 billion yuan, respectively, an increase of 9.06% and 10.17%.

The domestic market achieved growth, and the domestic sales volume of wool textile and dyeing and finishing industries accounted for 87.92% in January-February and the output value increased 10.28% year-on-year. The production and sales rate of Wool Textile and dyeing, finishing and finishing industries reached 96.79%, an increase of 3.21 percentage points over the previous year, and the growth trend was good.

The export market grew at the same pace. From January to February, wool textile and dyeing and finishing enterprises achieved a total export value of 3.203 billion yuan, an increase of 9.37% year-on-year, slightly higher than the average growth in export delivery value of the textile industry during the same period. It has rebounded from the previous year.
According to customs statistics, the total import and export of wool textile products in January-February was US$2.022 billion, a year-on-year increase of 10.61%. Among them, exports were 1.362 billion U.S. dollars, an increase of 13.10% year-on-year; imports were 560 million U.S. dollars, an increase of 4.58% year-on-year, and the growth rate was clearly up from the same period of last year.

Due to the low base in the same period of last year, there was a significant increase in export products. Only the number of upstream and midstream products such as wool strips and knitted faux furs fell, among which the number of wool strip exports fell by 8.04% year-on-year, and the export amount decreased by 21.49% year-on-year. The export situation of wool yarns and wool fabrics began to improve from the end of 2012, showing a slow growth from January to February this year. The growth rate of final product exports was relatively high, with blankets up 25.47% year-on-year, wool sweaters up 30.10% year-on-year, carpet exports up 18.87%, and plush scarfs up 82.30%. Only the woolen woven garments still experienced a slight decline. Observing the export areas, except for Shanghai, the export value of Jiangsu, Zhejiang, Shandong, and Guangdong, the top five countries in terms of export volume, generally increased.

A Bomber Jacket is a casual jacket that was originally created for military pilots and eventually became part of popular culture and apparel. It has evolved into various styles and silhouettes including the 'letter man' jacket and the fashionable 'bomber' jacket that is known today.